Well it all started last friday around 6pm.

The hubs and I were away from home and running a few errands.

A storm came up and caught us in a resturant eating dinner. Well right in the middle of the baked potato and ribs........POW! We heard a loud pop and the power went off. Okay so dinner at Golden Corral turns into a candle light dinner for 2. Worked for us! We finished our meal and had coffee with dessert and then decided to go on to the mall since the rain had stopped and we were pretty close already. We left the mall around 9pm and headed home. (25 miles to go)

Lots of debris and leaves all over the roadway. And then we left the interstate(15 miles to go) Lots and lots of leaves and limbs on the roadway. Had about a 1/4 tank of gas and was going to stop ahead to fill up before going home. Well that was not going to happen because there was 5 stations from here to home and none of them had power and therefore could not pump gas.

Well this was just the beginning of a long spell without power. But it gave us lots of time to think and reflect on what is important and who we really are. After all no one was injured and our home was in good shape so this was just a small inconvienence. So we stepped up to the plate and made the best of it.  After all our grandparents did not have AC so we could make it in a pinch. The coolest our house was inside since saturday morning was 86*. And remember there was no air movement. So we needed a cooler place to sleep and spend the days in the shade. This is what we came up with. 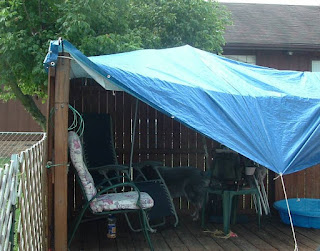 It may not be the prettiest in the neighborhood. But it allowed us to be in the shade and also to sit out if it was raining. Rain was a real blessing as it would cool things off and allow you to get some rest.

We found it helpful to get up and moving before daylight. This allowed us to get things done before the heat started to rise and then we could sit and rest in the heat of the day. Again we had to remember that this was the way our forefathers had done it. 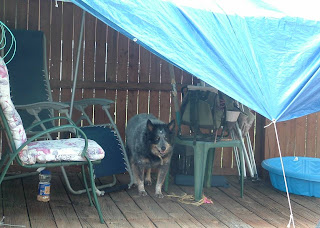 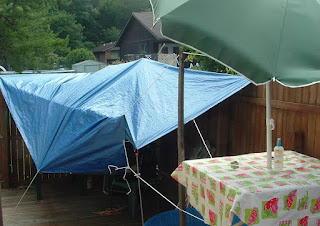 We had the small pool for the dogs to get into and cool off but also we could put our feet in and cool ourselves down A bit. I also had a spray bottle that I kept filled with water so we could dampen our skin and allow it to evaporate.

This was the view from the inside looking out. 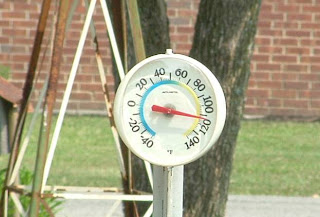 In case you can't see it it says, 111 degrees. It was hot and we ate well and had lots of water. Ice was a problem as there was none to be had. Locally there was no gasoline as well because of no power to pump it with. But as of late monday evening we were back to normal.........well we at least we had the power back on! 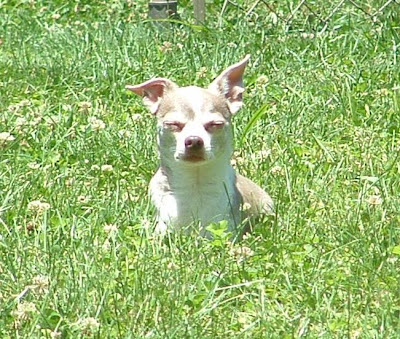 But if you are a chihuahua you love every minute of life no matter what the temp is outside!
Posted by Kim at 3:11 PM 4 comments:

Kim
Hello, I am a wife, married for 40 years to the man of my dreams, mom to 2 sons, and grandmother who tries to enjoy all that life has to offer. I love the Lord and give him credit for all that is. I have been creating art in some shape or form since I was very young. And I still am creating art today. I am on a path of using locally sourced post consumer goods to make usable items for your home. These items enable me to keep perfectly good (fiber) out of the landfill, while adding beauty to your home and life.

Folks who stopped by

I am featured here